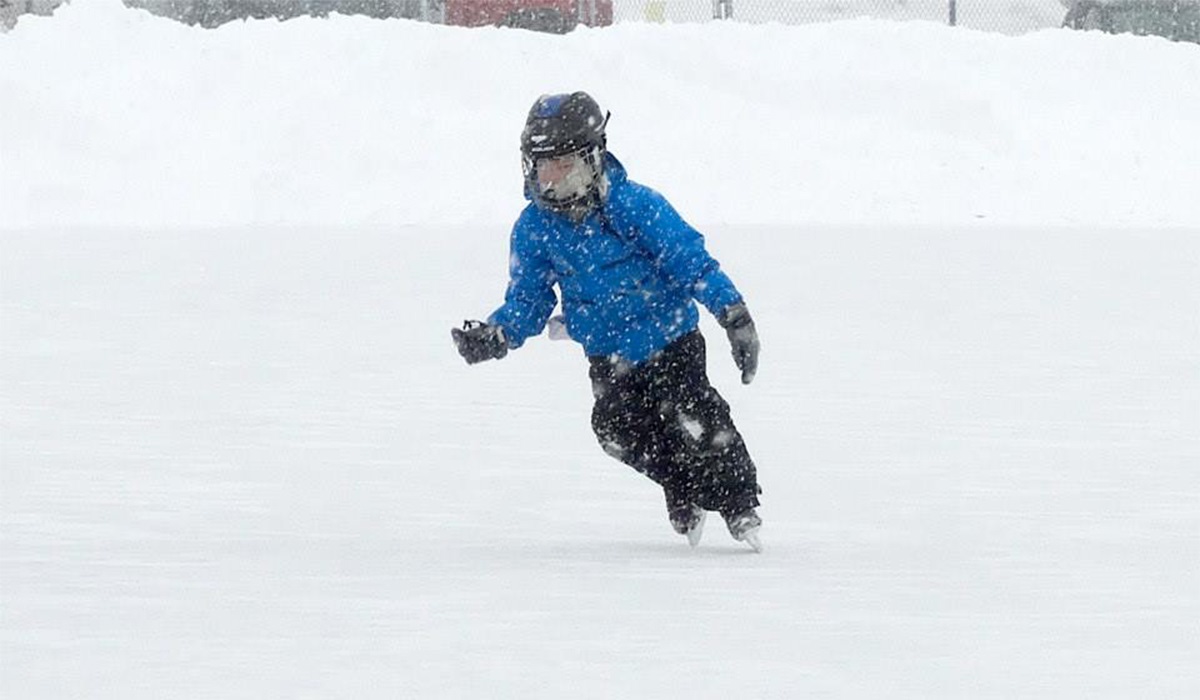 Here in the Ogden Valley we have a historic ice rink located right in Huntsville!

Ice Skating in Huntsville has a long and prolific history dating back to Jefferson Hunt in the 1860’s.  During winter meetings with his Native Indian friends, Jefferson was known to skate on the frozen South Fork river just upstream of the beaver dam in what is now known as the river bottoms.  His forged steel blades were strapped to the beaver pelt boots that had been handcrafted by one of Jefferson’s wives.  He often impressed the small gathering by performing Pirouettes on the frozen river bed.

Some 75 years later, Whiskey Joe and Chris the Danishman were frequently challenged to a game of two on one drop in hockey at the town square by a young man named Gordie Howe.  Apparently the young Canuck spent winters away from frigid Saskatchewan to visit grandma Howe in the more temperate Huntsville climate.

These tales may be a bit historically challenged, but certainly would not be the first stories with a slight embellishment or two with the intent of eliciting interest.

In more recent times, the history is a bit more clear.  Frustrated by the snow removal and accessibility problems associated with skating on the recently raised reservoir, “Blondie” Petersen and his sons began flooding the tennis court in the town square during the 1960’s.  Mayor Leon Sorensen and sons Dave, Doug and Don also put in countless hours crafting this early rink.  They would drag garden hoses from Orvis Petersen’s home and spend night after night perfecting the rink, which would be considered small by today’s standards.

Blondie, along with young sons Kenton and Blake, would put on their old, dull, Deseret Industries skates while sitting on Orvis’ front porch, then make the trek across the street to the tennis court for some power skating. Their skates were sharpened by the asphalt as they made the journey.  Blondie was the true pioneer of the rink as we know it today.  Sadly, he passed and took with him the knowledge, determination and hard work associated with ice rink construction.

Some years later, during the mid-late seventies, a young and ambitious Valley Junior High School History teacher named Daurel Barnes gave the rink new life.  Mr. Barnes, as known by his students, spent time with and was schooled by the ice rink creators of the Logan Ice Rink, which was the premier rink in the state at the time.

The rink was recreated directly west of the tennis courts and had a rectangular shape running north and south with the entrance across from the schools east entry door.  Daurel enticed a couple of unsuspecting, local students to help with his endeavor by allowing them to miss a history class or maybe even an occasional English class to spray the rink during the cool mornings.  The downside was that they also had to spend late nights sweeping and spraying the rink in the bone chilling temps. In return, the boys were given keys to the school so they could have a “warming hut” to wait in between coats.  They had free rein of the school and spent time drinking hot chocolate, running through the empty halls and dancing on Principal Scott Ballif’s desk.

That rink was a big part of winters in Huntsville. Organized Ice skating lessons and clinics were given by professional skaters and Valley students skated during recess, lunchtime and after school.  Hockey was not real big then and most kids skated on figure skates. Marshal Hislop, in true Evel Knievel fashion, perfected the art of jumping fellow classmates and other obstacles.

Eventually, Snowcrest was built and it came time for Daurel to pass on the reins.  Principal Ballif kept it going for a few years and interest finally waned when he was transferred.

Many years passed and the rink received a new revival in the nineties.  A few saviors such as D. Bell, Kenton Peterson, Sam Bellarosa and others resurrected the rink yet again. Yes, Kenton Peterson, the same Kenton who helped his father some thirty years prior.  They relocated the rink to its present location and have helped with many upgrades over the years.  The town acquired a tractor and a used sweeper attachment and also installed a hydrant as well as fire hoses to assist in the watering.  Mood lighting has been installed over the years to add to the atmosphere.

The most recent 12-15 years have transformed into more of an era for Hockey as well as free or figure skating. Many local kids have excelled in the sport and have been an integral part of the Weber High Hockey Club.  Other home town boys have even gone beyond high school to play.

There are many challenges to keep an outdoor rink alive.  Burnout among volunteers is a factor as it can be very tiring to spend late night after late night prepping and watering only to wake early a few hours later to do it all over again.  On any given night and morning when the temperature is below about 25 degrees or so, you will probably see someone working on the rink.  The volunteers payback is when they see people using, enjoying and respecting the ice.

So bring your family and friends and enjoy the Huntsville Ice Skating Park!